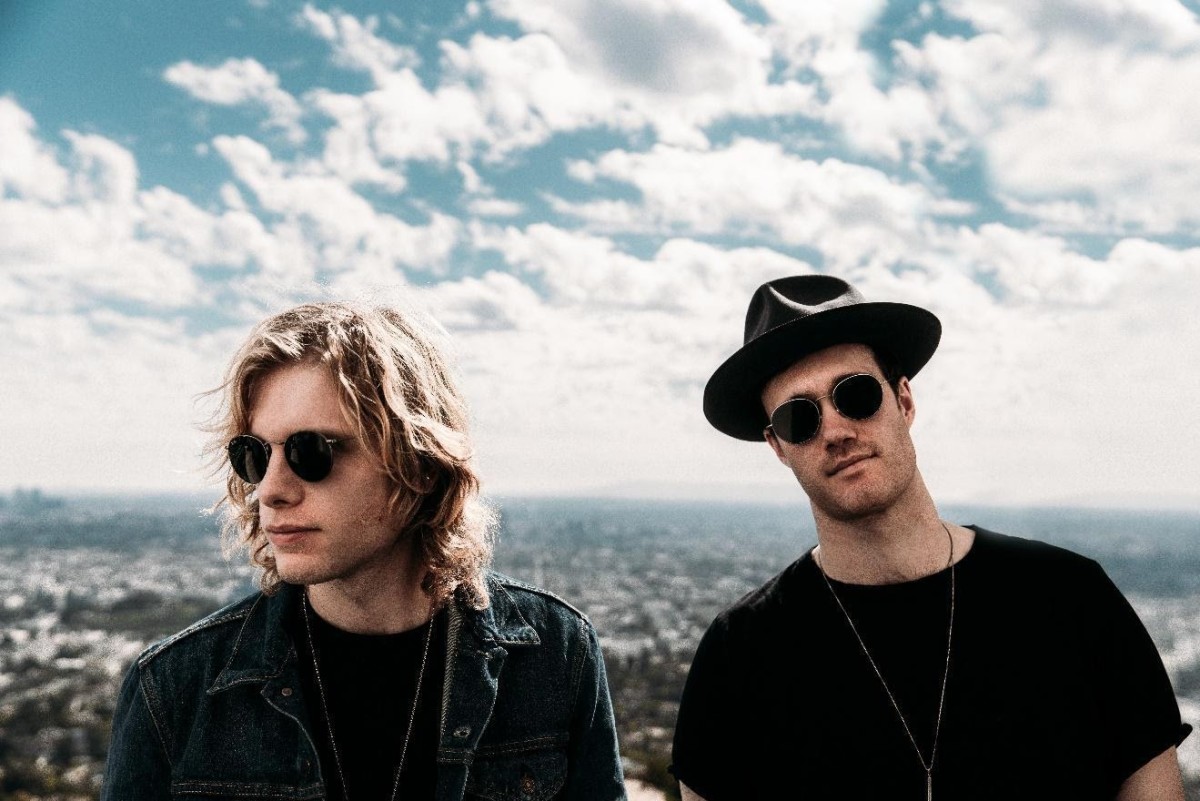 Bob Moses open up about the pitfalls of 2020, collaborating with ZHU, and their musical influences.

Catapulted to the forefront of dance music with their 2015 Domino Records album Days Gone By, electronic music duo Bob Moses gained a reputation as one of the hottest acts in the scene.

Rising out of the New York City underground, the duo consists of Tom Howie and Jimmy Vallance. Taking the electronic community by storm with their one-of-a-kind and dynamic sound, the duo earned two Grammy nominations for their 2015 track “Tearing Me Up” and their 2018 Battle Lines project was named one of the best albums of the year by Billboard.

Throughout their career, Bob Moses have released a solid stream of after-hours electronic beats characterized by spectral synths, passionate lyrics, and hypnotic rhythms. Howie’s vocals often steal the show as he sings deeply introspective messages straight from the heart.

Their latest EP Desire, which features a massive collaboration with ZHU, displays the depths of their emotive electronic musical genius. The EP features six distinct tracks that take listeners on a musical journey as Bob Moses explore the theme of desire and reflects on the ways it has personally impacted their lives. The interactive video for “Desire” has already earned nearly 2.5 million plays since it dropped in mid-July, and uses anaglyph imagery to showcase the ups and downs of desire.

We had the chance to catch up with Bob Moses on the release of their new EP, their BobCast livestream series, and much more.

EDM.com: Jimmy, I heard you recently relocated to Los Angeles. What was that move like, considering the pandemic?

Bob Moses (Jimmy): I came from New York. I was on tour and I told my girlfriend let’s move on March 15th. We started moving out in the middle of February. We basically arrived in our house here in LA twelve days before lockdown started.

I can’t believe what it would’ve been like if lockdown had happened when we were trying to move. I’m glad we got out when we did. I love New York, but during the pandemic proximity is the danger. New York is the most densely populated place so I’m happy to be here in LA.

EDM.com: Where did the name Desire come from? Can you share a personal anecdote that may have affected your decision?

Bob Moses: The name Desire came because we did a collaboration with ZHU. This whole EP came to fruition because of that collaboration. We were on tour to support our last album Battle Lines. We were mostly playing the tour with a band at bigger venues. We made some beats to play at those shows. Then we had the idea that when the tour was over we could try to pull some of those together for an EP or something if they gelled.

We booked a couple days off at a studio in LA between shows. ZHU was in town. We had previously met on Holy Ship! and we were buddies. We didn’t have any real plans to collaborate but he came by the little room we were renting in LA, and we just tried collaborating. The core of that track “Desire” came together during that one afternoon.

Then as we started finishing up other ideas, all the lyrical content of these tracks seemed to focus around desire, and how it sets you free or leads you to ruin and how you navigate its different aspects. We not only thought the EP summed up that title but we were also proud of that track with ZHU. We wanted that to be the first thing we put out.

We both have experiences with our own sets of desire. It’s a delicate balance – it’s something everyone struggles with. One of the main influences was the mythological story of the Greek god Icarus who was trying to get to the Sun but got too close, burned, and fell. Desire can create a tremendous amount of ambition to get you to accomplish things, but it can also ruin you. This is our modern take on an ancient story.

EDM.com: Can you describe the experience of working with ZHU on the title track? What was your creative process like?

Bob Moses: It’s one of the first collaborations we’ve done and a super cool experience. ZHU had some ideas about how to start the track. Each of us would then take turns sitting at the computer. We just kind of riffed off of it until something started coming together. ZHU suggested these stabby chords that happen with the synth early on and that and the bass line kind of formed the basis for the track. Everyone contributed and no one sat back.

Sometimes the studio is a struggle and other times things happen really naturally. This is one of those times where things really came together. We were all very inspired.

EDM.com: How have bands like Pink Floyd and Nine Inch Nails influenced your music today? Can you point to a specific song or musical element present in your catalog?

Bob Moses: Pink Floyd really pushed the idea of the concept record and taking you on a musical journey by painting a sonic landscape. Pink Floyd did it in a way that was very ethereal. They were so ahead of their time. For DJ sets songs are meant to be mixed together, so I think the inspiration comes from that. Having this masterpiece that flows from start to finish and can be listened to in one sitting. I think that’s why it stood the test of time.

Nail Inch Nails’ Down the Spiral is a concept album about a man’s descent into madness. Like Pink Floyd, it’s obviously more electronic. It should also be listened to from start to finish and takes you on a sonic journey. It’s very lush but also very dark.

I remember a few years ago when we made Battle Lines, I wanted to find the darkest record made in LA and I found Down the Spiral. I found a lot of connection to that record in that you can be very dark and bruiting when maybe your surroundings weren’t.

Bob Moses: The only consistent part is it’s different every time. It starts with a germ of an idea. It could be a melody idea with a lyric idea, a drum groove or a chord progression. Sometimes we’ll start something from scratch, or we’ll listen to something by an artist we like and think maybe we can make something like that. It could be quite fleshed out or just a melody and a piano part.

If both of us agree it’s cool and we’re excited by it then we just go from there. We’re often on the same page and it’s a vibe. We both often know what the other person wants to do before the other person even says it. It’s very cool that we can finish each other’s sentences which often results in an awesome song, but it doesn’t always work out that way.

EDM.com: Where do you currently get your inspiration?

Bob Moses: Our inspiration has always been our life. It helps to write about what you know to get the most genuine results. Often experiencing or having something personally affect you will get you the best results. We let things percolate in our subconscious. If it bothers us enough, it will often come out in our lyrics. We’ve had full conversations in our lyrics about things we would never personally talk about. Songwriting is quite a cathartic experience so deep and meaningful conversations will be a byproduct of lyric writing.

EDM.com: You recently launched BobCast. How do you make your series stand out in a world where livestreaming is so prevalent?

EDM.com: Which achievement in your career so far has been the most meaningful to you?

Bob Moses: We’re very honored to have all of the opportunities we’ve had like The Grammys and Ellen, but they’re still fleeting. The things that feel like the biggest achievement are playing sold out shows to tons of people you wouldn’t otherwise meet who sing your songs back to you. Or hearing that someone was going to hurt themselves didn’t because they listened to our music. That’s when we’re like ‘what we’re doing really matters’.

EDM.com: How has the New York club scene influenced your music today?

Bob Moses: We spent about a year writing music in New York. We knew we wanted to write songs and combine dance music. We were doing guest vocals on this label Scissors & Thread. We got sucked into this underground illegal New York rave scene. That sound became a huge part of our aesthetic. Till this day the core of our sound still feels like smoky Brooklyn warehouse.

EDM.com: Any positive takeaways from 2020? Have you had a chance to do something you hadn’t done in a while because of how busy you’ve been the last few years? Has it been a spiritual experience at all?

Bob Moses: It’s been a spiritual experience in that it’s forced us inside of ourselves. A lot of growth has come from that. We’re trying to find the silver lining. We’re getting a lot of time to focus on music. We haven’t had this much time without getting on an airplane in eight years. We’re getting all of this time to focus on music and that’s been very positive. We miss our fans and we miss playing live.

You always have two choices – to focus on the negative and or focus on the positive make the most of something. It’s a spiritual practice to focus on things to keep yourself in a positive lane. It’s challenging, but we’re doing the best we can.

We’ve gotten a chance to get in touch with our friendship a little more. Our personal relationship has nurtured and grown. It’s been a positive one for us so far. We’ve learned a lot of valuable lessons and are coming away from it inspired.

EDM.com: What has the experience been like working with Domino?

Bob Moses: They’re awesome. They’re a fantastic label. They let us do whatever we want. They support us in all of our decisions and give us valuable feedback. They’re real music lovers.

Before we signed with them we’d heard all of these horror stories about labels. We were in this weird studio in the middle of nowhere in Michigan. Jamie Hince from The Kills was randomly there recording. He said he loved them and that they were awesome and we thought to ourselves that’d be great. We couldn’t imagine a better label situation to be awesome.

EDM.com: Anything else you want to share with your fans out there?

Bob Moses: We hope that everyone is staying happy and healthy out there. We’re very grateful for the support and we can’t wait to hopefully get back on the road soon and play some shows.